I started brewing beer at home in 2009 and over the course of the past several years, I have become an avid homebrewer. I brew numerous styles of beer, cider, mead, and wine. As an electrical engineer, I enjoy designing and building gadgets, so I have designed quite a few brewing gadgets including an electric brew system.

I have won numerous awards and honors for homebrewing, including:

After brewing all-grain for a while, I decided that I wanted to step up to 10 gallon batches, so that I could split batches with different yeast or treatments, or just have more of beers I like a lot. However, at that point I did not have anywhere to brew outdoors and the kitchen stove wasn’t going to cut it, even with a heat stick. To solve this problem, I decided to design and build an electric brew system that could run on 120V power, since I didn’t have any available 240V lines. I have been very happy with this system and continue to use it at my house where I do not have the same constraints.

I use a custom-made digitally controlled homebrew system that also doubles as my cheesemaking system. It consists of a 15.5 gallon heated hot liquor tank and brew kettle made from a converted sanke keg, a cooler as a mash tun, 2 March pumps, and a digital control box.

The brew kettle / HLT has 2 electric water heater elements mounted into it, providing a combined 3650 watts of heating power. For transfers and recirculation, it has a stainless ball valve with camlock quick disconnects and a dip tube. A false bottom catches hops and break material. A RTD thermocouple is mounted into the pot as part of the temperature control system. A thermometer and sight glass are included for convenience.

The control system is a custom-designed PID control box that I designed and built, which controls 2 separate 20A 120V circuits to power the heating elements. An Auber auto-tuning PID is used to control the temperature by duty-cycling power to the heating elements in the brewpot based on the reading from the RTD probe. A switched auxiliary outlet is provided on the control box for easy control of the March pumps and any other accessories.

For smaller batches, I also have a Grainfather system.

The main serving kegerator is a converted chest freezer that fits 14 kegs. It has 8 taps through the front (additional beers are served on picnic taps) and 5 different serving pressures with 15 different co2 connections including a growler purge tap. I also have a 2-tap kegerator built into my outside bar. 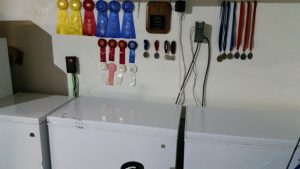 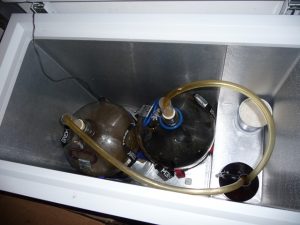 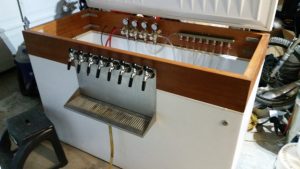